I started writing something on the plane, trying to capture all the whirlwind that was landing this job and landing in this country. But I kind of abandoned it and didn’t pick it back up when I got reconnected, and now I’m having trouble finding its flow.

So I’m offering this: it was mayhem. I didn’t know up from down by the time I was finally heading out. And it really didn’t finally sink in until I boarded my flight to Casablanca: an hour delayed boarding, with no explanation; a mad shuffle to board at that time, regardless of what rows were actually being called; and the sounds of crying children heard over the blaring Arabic music on board. Announcements made in Arabic, French, and then (thankfully) English.

One last drive to Ucluelet 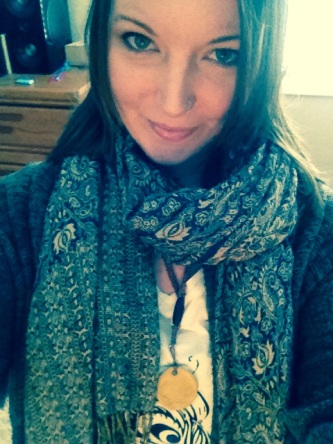 Thanks KD for the lovely new necklace!

My life, in two bags. 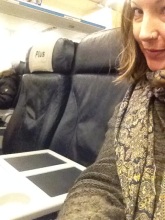 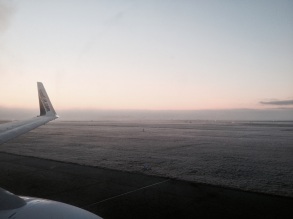 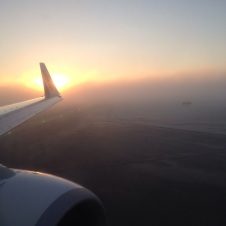 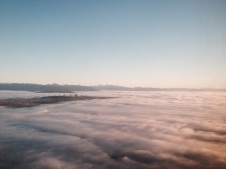 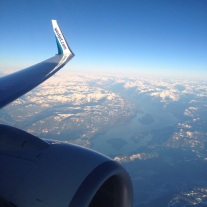 Say goodbye to the Rockies.

A brief stop in Calgary.

Here’s our chariot, to whisk us to Casablanca!

So then I arrived (only 2 hours late). “The Man” (who turned out to be just a hired driver, I later found out) was holding a piece of paper with my name on it. The other new teacher, who was also to be my roommate, had arrive before I did, and was waiting with him. We drove to our school only to pick up the keys, and then were dropped off somewhat abruptly at our new apartment. It’s a nice place, but despite the warm colour scheme (our living room and hallways are orange), it’s a lot cooler than I was hoping; it’s all tile and the walls are this glazed stucco kind of stuff, so everything feels very cold and modern. Again, very nice, but a different style than the gypsy-Arabia-mosaic-Bohemian style of most hostels I’m used to; it’ll take some work to warm it up.

My bedroom, new sheets and all. Gotta do something about this colour scheme..

There’s a decent sized kitchen with a fridge and stovetop, but it’s not yet hooked up. I’m wondering if I should try to connect the propane bottle myself, but decided against it; I’ll probably blow myself up. There’s a hot water tank, which we plug in, because we both certainly could use a shower. There is a nice living room, and two bedrooms. I am chagrined to find out that there are sheets on the bed; the only thing I had been told explicitly to bring with me (which caused a hurried trip to Ikea the night before I left, and took up a substantial amount of space in my bag!). At least these ones I brought with me are nicer, and luckily match my blue room quite nicely.

There’s food in the fridge, and pasta on the shelves, but again, we have no way to cook them. So we head out. I’ve never been to this town before, let alone this neighbourhood, but thankfully the main road is around the corner, and we easily locate the lunch spots. However, it’s an awkward time of day to be eating, around 3 pm, so most real food is already gone. There’s no wifi at the house yet, and I definitely want to get connected, so we decide to brave the city centre and wave down a cab.

My french is surprisingly good; I mean, not good good. But totally functional. I’m impressed; I didn’t think I was getting by that well. So, off we go. We still don’t really find a solid lunch, but I’m happy because I did manage to get my hands on some red mzemen; a flakey flatbread kind of thing, with cooked onions and peppers inside. Soooo good. We have some tea, and my roommate (first time in Morocco) orders some cow’s bone with chickpeas (obviously not what she was expecting, but I thought she would get the drift when I said that I didn’t want it, and she should look at it again to make sure she was on board). She picked, I ate. We left.

I got my phone hooked up at INWI with a Zen International plan, but we held off on getting a modem until we found out how the reception is at our place (turns out, it’s great. However, our boss suggests we go with Maroc Telecom for wifi, but as that process is going to take a while, I’m using my phone as a hotspot for now).

We headed home, and ended up skipping dinner since we ate so late for lunch. But when we get there, we are surprised to find that our place was freezing. I mean, there was snow on the ground when I left, and I’m complaining about the +10 in Morocco, but seriously, life without central heating is not a life worth living. I don’t know how people do this. It took us two days to get space heaters, and let me tell you, those were a long two days.

No packaging. Nothing processed. No waste.

One girl's adventures into baking, crochet and other crafty endeavours...